Joplin and Camdenton School Districts Have Something in Common Other than Common Core. Lack of Transparency.

We’re BACK!  Welcome to our new look on WordPress!  And no, we didn’t take an extended vacation to the islands, although that would have been a delightful excursion.

It’s a long story but suffice it to say, there is no such beast as a “common education” and we do not have common talents.  Not everyone can be a writer, a researcher, an activist; just as many writers, researchers and activists can (or should) be computer gurus.  We all have our talents and my lesson learned is this: I don’t do well with computer issues.  They are too nebulous and dealing with Google is like, well, dealing with the Common Core proponents.  Neither deals with the public well and a face to face discussion about the facts never occur.  So, Anne and I are back thanks to our angel Phil in Florida who got us back on track!

In the meantime, the education landscape can be described as a mystery novel.  Many superintendents don’t share information with their school boards, unions, teachers and taxpayers on the long term development/direction/cost of education.  This seems to be a pattern of behavior of educational bureaucrats and standard operating procedure in public education the last several decades.

MEW started covering Race to the Top issues in June 2010 and questioned why the governor, education commissioner, State Board of Education, and superintendents signed on to the original application for RTTT funding when the standards and assessments had not even been written.   We still have never received an answer to that question but we got a chance to ask it when RTTT was offered directly to the districts.  The districts were no more transparent than DESE was in telling taxpayers about what RTTT would cost the districts in funding and lack of educational delivery/development.

Sit with that thought for a moment.  The Federal Government has bypassed a state agency to give money directly to local districts.  Why do we even need state agencies to be the middle man for federal funding to schools?  Why not just let the Federal government take over local districts and dictate how/what those districts teach?

This is the scenario this endless round of “free” money from the Federal government creates.  But the secret the superintendents don’t tell the taxpayers is it’s not free.  It creates underfunded mandates and never ends.  The taxpayers are on the hook for the mandates (not set by their local districts) and the funding of the programs when the funds run out.  This has all been accomplished without a vote by the taxpayers.

HYDRA LERNAIA was a gigantic, nine-headed water-serpent, which haunted the swamps of Lerna. Herakles was sent to destroy her as one of his twelve labours, but for each of her heads that he decapitated, two more sprang forth. So with the help of Iolaos, he applied burning brands to the severed stumps, cauterizing the wounds and preventing regeneration. In the battle he also crushed a giant crab beneath his heel which had come to assist Hydra. The Hydra and the Crab were afterwards placed amongst the stars by Hera as the Constellations Hydra and Cancer.

Randy Turner has an article on the less than transparent RTTT application from the Joplin School District here entitled What the Joplin R-8 Administration is not telling you- Part One:

The Joplin R-8 superintendent was not getting what he wanted and it was such a simple request. He was days away from the deadline to submit the school district’s proposal for 2012 Race to the Top funding from the federal government and he could not get the head of the Joplin NEA chapter to sign off on the request.

Read the rest on why the NEA refused to sign the request and how even though the district did not get the grant, it is still spending money on programs and staff with no apparent funding source.  If Superintendent Huff honestly believes this process has been transparent, he needs to explain this RTTT application process with the taxpayers.  I have a feeling the Joplin taxpayers will be seeing bond issues for more money and they need to have the full story on why and for what.

Not only does Huff circumvent transparency in informing the NEA on RTTT specifics, he circumvents the spirit of the Sunshine Law.  From the Turner Blog:

The deadline for submitting an application for the 2013 Race to the Top was October 3. I do not know if a plan was submitted, but district officials were working on one. A parent, Melissa Braun, wanted to know what was included in that application and filed a Freedom of Information request for the document. Since it was not ready at that point. C. J. Huff sent Mrs. Braun the following response (in the accompanying letter), saying it would cost her at least $150. 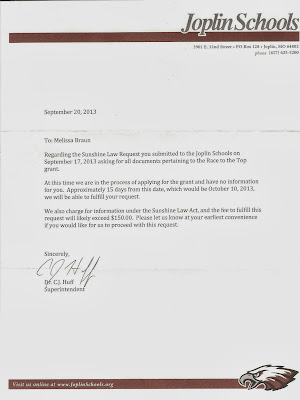 Why the information would cost $150 when an application would be complete and not require any extra time for clerical help to put together, he did not explain.
He also did not offer her the option of having the document delivered to her electronically and considering the emphasis that district officials have placed on 21st Century learning, it seems hard to believe that these public documents would not be available in an electronic format.
The government critique indicated that community support was important in the Race to the Top selection process, so why was the application never discussed at the televised board of education meetings where the application would have been submitted to more district patrons. Or better yet, put it on the district website where everyone can take a look at the district’s vision for the future.

Sunshine Laws exist for a purpose and they should adhered to instead of making life difficult for the taxpayer asking the question.

I can’t wait to read Turner’s Part 2 and the school soap opera in Joplin.  It’s time for the taxpayers to reclaim their power to have their questions answered.